I don't know about you, but every once in a while I pull out a tape with no markings on it at all and wonder: What in the world is this?

It could be home footage from last Christmas, or the Master tape from my last film, or maybe even that job I did for Job three weeks ago. The problem is that I have so many tapes laying around that I can't possibly remember what goes where, and so I have footage on tapes that just about might as well have never been shot.

What do you do about this situation? How do you make sure you know what footage is where? How do you keep track of all your video tapes?

It's really simple: Label your tapes. I don't mean that you need to go hog-wild with this kind of thing like people making feature films. They keep track of everything from the Director's name to the kind of film that was in the camera and put that information in front of every single take with the Slate. That's likely overkill, but not a bad idea.

Me? I put the name of the project and the tape number on the top spine of the tape case. For example: A Day in the Life of Luke 15

That's enough for me. I know what project that tape belongs too and which tape it is. Since I use the Log and Capture feature on my NLE, it keeps track of which tape has which footage for me as long as I name the file "A Day in the Life of Luke 15" when I capture the footage.

On set, when I come to the end of my tape, I pull out the next one and write "A Day in the Life of Luke 16" on the spine of that case. It's really quick and doesn't take forever to figure out what's what when I'm sorting through my stacks of tapes later.

A word of caution: Never, never ever label your tape "My Project" or "The Movie" or "Something" or anything like that. Be descriptive. Use your movie's title if you know it. If you don't know it yet, make it descriptive enough that you could figure it out in two years when you've forgotten. And keep the tape names consistent. Don't name one "Luke's Life 3" and the next one "The Life of Luke 4". As apparent as that may be today, tomorrow it will lead to confusion.

Tip of the Month: Always use the "Protect" tab when you're done with a tape. 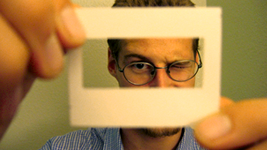